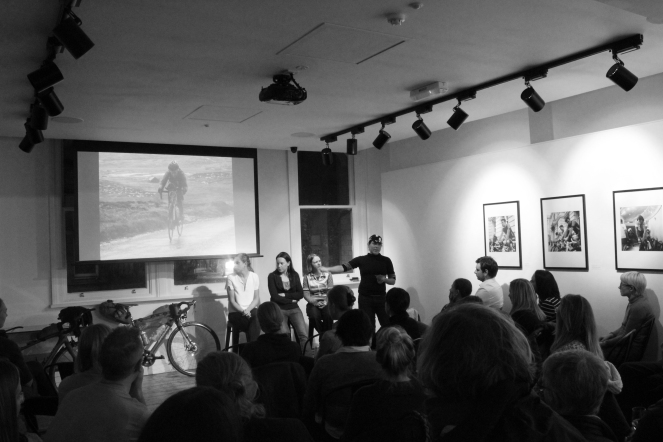 All of us here at Lady Pedal love to ride; some further than others, some faster than others. Last week we went to hear from the women who like to do both in the form of “ultra-distance racing” – they ride hard.

The event was put together by The Adventure Syndicate, a group of extraordinary female cyclists who are championing their achievements in order to inspire other women to challenge themselves and reach their full potential.

The panel of four was chaired by Emily Chappell, ex-courier, international tourer and intercontinental racer. By her side were 3 accomplished women with different, but parallel backgrounds:
Kajsa Tylen – after first getting into cycling 4 years ago whilst doing triathlons, she’s currently spending a year of daily rides to set a new Guinness World Record for the furthest distance cycled in a year by a woman – 28,000 miles, and strengthen her “weakest” discipline.
Shu Pillinger – serial ultra-competitor, Shu has competed in several races as well as a winning a double ironman distance triathlon and recently became the first British woman ever to have completed the Race Across America.
Rebecca Harrison – a keen beginner in the world of ultra-distance, she successfully completed the Transcontinental this year. This won’t be the last we hear of her.

Push yourself beyond your limits

How do you decide to take on a challenge? Do you work your way up to it, steadily increasing the difficulty level incrementally? Or is it best to throw yourself in at the deep end? There’s no right or wrong way to go about it.

Shu and Emily discussed the increased pressure that can come from knowing your capacity – once you’ve reached a certain level, there’s no backing down. Being super prepared for an event is the best way to avoid injury and increase your chances of finishing but it may decrease the excitement. Becky on the other hand, having decided to participate in the Transcontinental with no prior experience, was excited to push herself to her limits and see how far she could get.  Perhaps the real challenge can be found in taking on the unknown.

Some might say the race is about completing a challenge, but the most memorable moments often emerge from the unexpected encounters along the way. All our ladies had heart-warming stories to share of strangers’ kindness, ranging from roadside food and drink, to accommodation, to pay-it-forward style physiotherapy on the fly!

One of the aspects of long distance racing that most might not have previously considered is the effect of the online tracking system. Whether it’s reassuring to know that people are always watching out for you or worrying that your location is continuously broadcast to anyone who might care to look, these trackers can lead to some unexpected consequences.

Emily was accosted by a German journalist who kept up long enough to conduct a brief interview, despite the 15% gradient, before being left behind. An unusual situation, but she was quick to highlight the positives – “If I can cycle this and have a conversation at the same time, I must be doing ok!”. Kajsa once received concerned messages from a fellow cyclist after he spotted her making an early stop, only to find she’d dropped in on a friend for tea and Shu’s cycling team quickly had to find and remove her tracking device after fans noticed she’d ended up in A&E before her family had been alerted. But location tracking can have its saving grace – when Emily was taken ill on the Transcontinental race, it was one of her trackers in Slovenia that responded to her tweet, appearing in the hospital waiting room to take her back to a bed and clean sheets.

Highs, lows, and transitioning between them

Ultra-distance races take an immense toll on both body and mind and each rider will have different reactions and responses to the strain.

Shu elaborated on the mental aspect of cycling – riding for her is about learning to accept your mistakes, disciplining yourself learning to trust that lows are temporary and more often than not sticking with it will pay off in the end. You quickly learn from your mistakes; how to recognise negative thought patterns, and how to turn them around.

There are some notable differences when riding with a partner – Becky trained alone but cycled across Europe with her boyfriend, “He’s very tolerant” she commented. Everyone has their own rhythms and a strong relationship is required to handle the delays and delirium resulting from sleep deprivation and exhaustion. Crewed races are rather more cut-throat- you’ll either be shouted down or abandoned.

When upset and racing alone, Emily has a tendency to pent it up and let it ferment, whereas Kajsa’s advice was simply to sit down and have a good cry – “I thoroughly recommend crying, it’s very therapeutic”.

One of the important points to note is that everyone’s body will respond differently to this kind of intense activity, and it’s impossible to know what might start to bother you after 300 miles of cycling. Make sure to take plenty of “Vitamin I” – otherwise known as ibuprofen. Don’t be put off though, not everyone gets pain, and there are a number of potential causes; bike, setup, diet, shorts, altitude, sleep.

Your mind may play tricks on you – seemingly unbearable pain on day 3 might suddenly disappear, day 11 might seem euphoric. We psychologically program ourselves to go for as long as we have programmed, hit the target, then no more. But don’t let short term highs and lows get you down it. Certainly not until you’ve done one of two things: eat, or sleep.

When a race pushes your body and mind to extremes, strange things may start to happen. Shu let us in on her experiences during the RAA and the training leading up to it.

Shu has a tendency to cycle without stopping and survives on 2hrs sleep per night. Around Day 3, the paranoia kicks in, and once, on a training route in Ireland, she was cycling through a dark forest one night only to feel she was not alone… She described terrifying goblins, clawing at her from the trees. She was so affected that she began goblin hunting on subsequent night rides, to try and overcome the barrier but never came across them. Then in America, they were back, this time cheering her on!

All our ladies have some experience of sleeping rough, and never felt threatened. Emily concluded that whilst she preferred sleeping outside, she probably got more efficient rest in a hotel and perhaps her racing would benefit from a more luxurious race strategy in future.

How tech is training?

There are many methods to train for a long ride, heartrate monitors, GPS and specially designed programs. Becky’s training is low tech and simple – “I just ride!” whereas Shu’s training depends on the end goal and the type of race, based heavily on advice from veterans. Kajsa uses a trial and error approach to training to find her own style and has discovered that her lows are more time of day specific than point of ride specific.

Failure? Get over it

The stories shared by Shu, Emily, Kajsa and Becky have shown failure to be an overwhelmingly positive experience in the long run. Emily and Shu used failed race attempts as motivation to go back and finish the job. If at first you don’t succeed, get up and do it again.

Another response to failure is to move the goalposts. When Emily set off to ride around the world, after two years it stopped being the journey she wanted it to be and realising that she was no longer enjoying the trip she flew home after reaching Japan, to rebuild the connections she felt she was losing through being away. She was ready to stop and had achieved what she needed to. Kajsa spoke to us about how she was comfortable with changing her milestones within the challenge to keep things achievable. At the end of the day, they’re your goalposts, do what you want. Those around you will see only success.

In summary it was a hugely successful event, more than filling the room, even on a rainy Tuesday evening! Many thanks to The Adventure Syndicate for putting together the event and to Rapha for hosting and giving a generous on-the-day in-store discount.

For anyone interested in participating in the Transcontinental Race 2017, make sure to contact Rapha who have generously offered to sponsor a team with racing clothing! Ask in store for details.